The main challenge of this Cost Action is to create a transnational network that gathers European researchers carrying studies on Middle-Class Mass Housing (MCMH) built in Europe since the 1950s. This network will allow the development new scientific approaches by discussing, testing and assessing case studies and their different methodologies and perspectives. MCMH has been generally underestimated in urban and architectural studies and there is still a lack of comparative analysis and global perspectives. The number of transnational publications and scientific meetings has also been scarce. By crossing different approaches focus on Architecture, Urbanism, Planning, Public Policies, History, Sociology new concepts and methodologies will arise. Therefore, the Action aims to produce a wider understanding of MCMH sprawl, deepening on-going researches and focusing on the existing case studies. The current methodologies, surveys, catalogue and contextualization allow an initial mapping of relevant case studies, their diverse degrees of resilience and how they have been adapted to current (urban and social) conditions. It is intended to develop the knowledge of the interaction between spatial forms, behaviours and satisfaction and to combine methodologies of architectural and social analyses. The Action will be developed by three Working Groups, coordinated by a Core Group: Documenting the MCMH; Development of a specific set of (new) concepts for MCMH analyses; Leverage contemporary architecture interventions and Public Policies. In the Action will be involved researchers related to Mass Housing, MCMH Architecture and Urbanism, Planning and Public Policies, Sociological studies, Architecture History and Modern Heritage. 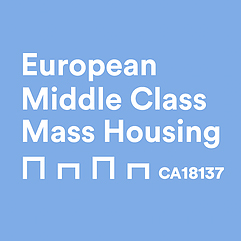